Jesus wept in John 11, and his weeping reveals the empathy of God. But what does Jesus’ weeping mean exactly for our view of God?

Watch John Mark Hicks teach on “Jesus Weeps” (from the video course) or read his post below. 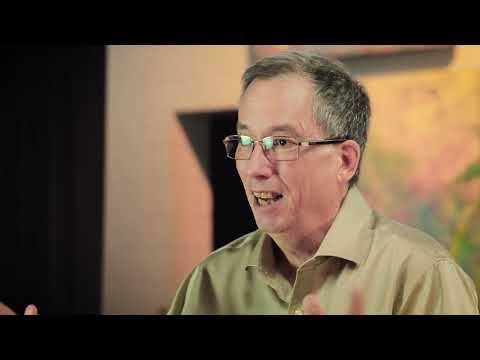 This video is part of John Mark’s Anchors for the Soul Video Course, which includes 10 videos like this on suffering.

Jesus felt all those emotions when he encountered the deep grief some of his closest friends were experiencing. These feelings filled his heart when he faced the reality of his friend’s death.

When Jesus saw Mary wailing in grief and saw the men and women with her visibly sobbing, a deep anger welled up within his spirit, and he roused himself and asked them, “Where have you laid him?” They responded, “Come and see.” Then Jesus burst into tears. As a result, the people present said, “See how much he loved him!” But some of them complained. “Could not this man who healed a blind man also have kept Lazarus from dying?”

The Death of Lazarus

“Lazarus is sick” is the way the story opens. The sisters, Mary and Martha, send for Jesus because they know Jesus can heal their brother. They have every reason to believe Jesus will come quickly because Lazarus is a dear friend whom Jesus loved. They are practically family.

However, rather than rushing to his aid as one might expect and for which Mary and Martha hoped, Jesus lingers for several days and arrives four days after Lazarus has died.

His delay is deliberate.

The death of Lazarus, it seems, may serve a greater purpose.

If Jesus had arrived earlier to heal the sickness, he would have only confirmed his reputation as a healer. He already had that reputation, which is why Mary and Martha send for him. Jesus wants them to see something more; he wants his disciples to believe something more.

But believe what? Not that Jesus is a miracle-worker—they already believe that. He wants them to believe something much deeper and more profound; something that, in fact, breaks through the bonds of suffering into a new day.

As Jesus arrives in Bethany, Martha runs out to meet him. She voices what Jesus has already discussed with his disciples. If he had arrived earlier, Martha says, Lazarus would not have died. We can hear the questions, the ones we all ask:

Then we hear the profound truth Jesus wants his disciples and Martha to believe:

“I am the resurrection and the life.”

“Martha,” Jesus asks, “do you believe this?”

Disciples, do you believe this?

Church, do you believe this?

This is why Jesus did not rush to heal Lazarus. He had healed the blind, the lame, and the diseased. He had even cast out demons. Such healings, wondrous as they are, do not threaten death.

Death still reigns, and death still enslaves. But Jesus is the “resurrection and the life.”

He is the great liberator who frees us from the bondage of death. He brings life and conquers death. This is the greater truth; this is the truth God will announce when resurrection and life dawn on the tomb of Lazarus.

Church, do you believe this?

Martha retrieves Mary, and Mary expresses the same sentiment as the disciples and her sister: “If only you had been here, Lazarus would not have died.”

For the third time Jesus hears the misgiving, even an implied complaint. Perhaps it is more than implied. It is confusion, bewilderment, and disappointment.

We can hear it in her voice when she says, “Why didn’t you come? Why weren’t you here to heal my brother and your friend?” Some of the bystanders also felt this, “Could not this man who healed a blind man also have kept Lazarus from dying?”

The “why” questions persist. The disciples wondered about it, Martha expressed it, Mary confronted Jesus with it, and bystanders complained about it. It is a good question. Jesus does not dismiss it, and neither does he rebuke their confusion. Rather, he points them to the reality he will soon revealed, “I am the resurrection and the life.”

Church, do you believe it?

When Jesus saw Mary wailing in grief and saw the men and women with her visibly sobbing, a deep anger welled up within his spirit, and he roused himself and asked them, “Where have you laid him?”

They responded, “Come and see.”

Then Jesus burst into tears. As a result, the people present said, “See how much he loved him!” But some of them complained. “Could not this man who healed a blind man also have kept Lazarus from dying?”

Jesus sees Mary’s grief, and he hears the communal lament that surrounds her. Jesus enters into a grieving community. He walks into a funeral home where grieving family and friends have gathered. They are wailing; their grief is visible and loud.

What is Jesus’ response?

Jesus is greatly disturbed in his spirit. The Greek term embrimaomai is an intense one.

It describes the snorting of a horse in battle…

…or a personal scolding (Mark 14:5), as well as stern rebukes (Matthew 9:30; Mark 1:43). The word is about anger rather than compassion. The point is not sentimentality but emotional irritation.

Jesus is on the verge of rage; he is upset, emotionally disturbed.

Jesus is annoyed by what death brings, angry at how death rules humanity, and recognizes that he opened the door for this grief in the case of Lazarus.

Death deserves our anger. It is disruptive. It destroys. It separates. And, as Andrew Peterson sings, “Every death is a question mark.” Anger is a natural and holy response to death.

Literally, “Jesus stirred himself.” He troubled himself. The same language describes how an angel stirs (troubles) the waters in John 5:7. That word also describes troubled hearts (John 13:21; 14:27). The anger does not sit idle but moves Jesus to action.

Jesus is disturbed but determined. He turns to his purpose. He asks where they have laid Lazarus. Jesus has stirred himself to action; he is determined to face the reality of death and act.

When “Jesus stirred himself,” he leaned into the wave of death, faced its reality, and acted. Angered and agitated, Jesus acted. “Where have you laid him?” he asked. He wanted to see the grave for himself.

And Jesus Is Sad

We don’t want to sentimentalize his emotions here—they are raw, real, and deep. These are visible tears.

The verb comes from the same root for “tears.” We might say Jesus sobbed, even wailed. He wept just like the mourners wept, just like Martha and Mary wept.

Even though he knows what he has determined to do and knows the raising of Lazarus from the dead will reveal the glory of God, he is nevertheless still sad. The grieving community affects him, and the trauma of Lazarus’s own death grieves him. Jesus does not minimize the bitterness of death. He feels the sadness.

The hope of the resurrection does not eliminate grief.

It does not mean we should not grieve. Jesus wept in the prospect of raising Lazarus from the death. But he still wept—for Lazarus, for the family, for humanity, even for himself as he himself experienced the grief of death.

He raises Lazarus from the dead.

Yes, Jesus could have healed Lazarus before he died, but the death of Lazarus serves the glory of God. It reveals Jesus as the “resurrection and the life.” It bears witness to the reality that life has come into the world, and this life overcomes death and will ultimately release the creation from its bondage to death.

Jesus asks, “Do you believe?”

Until that final resurrection day, however, we live with death. Death and chaos fill our lives, and we wonder—at times—how to respond, especially since we also have a great hope.

We may express a holy anger against humanity’s great enemy, death. Sometimes we are angry with ourselves, sometimes with the one who died, and sometimes with God. We lament and ask, “Why?” That’s okay; Jesus was angry, too.

We may face the reality of death with a determination to live despite its shadow. We lean into the grief, walk through it, and head towards the light. It is good to “stir ourselves” to action, and it is healthy to feel some agitation in the shadow of death.

We may weep, grieved by the reality of death and how it affects humanity. Tears are good; they are cleansing. Let them flow.

And . . . we believe: Jesus is the resurrection and the life!

Church, do you believe?

Death will not win!

John Mark Hicks, author of this post, teaches a video course on suffering and grief, which is available for free. Gain free digital access to this course for you and your entire group here.

How to Humble Yourself: The Four Core Practices of Humility

Learn to humble yourself through the four core practices of humility in the ways of Jesus: serving, submitting, listening, and confessing. The following is adapted… Read more »

Humility in the Bible: Knowing Who You Are and Making a Choice

Humility in the Bible finds its clearest definition in how Jesus taught his disciples to walk: Knowing our position and choosing to go lower. The… Read more »

The Sword of the Spirit: The Spoken Word of God

The sword of the Spirit in Ephesians 6 is the spoken word of God, and through practice we can wield well God’s word to fight… Read more »

Discipleship articles delivered to your inbox, free.
Shopping cart
There are no products in the cart!
Continue shopping